Questions › Category: Writing Task 1 › IELTS writing task 1 – can anyone help to check and score my essay? I am having test on July and I need more practice on it. Thanks:)
0 Vote Up Vote Down 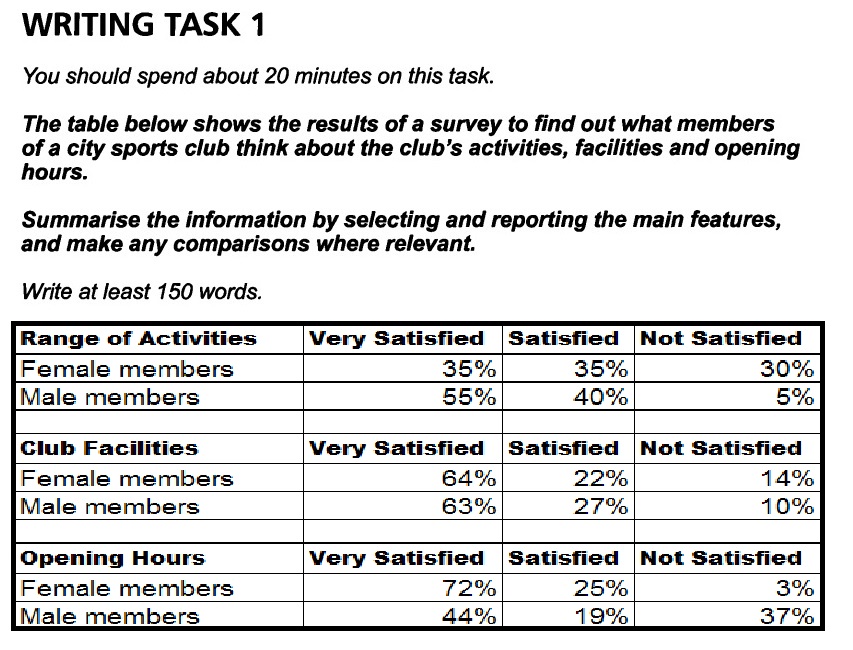 This table illustrates the degree of satisfaction of the male and female members towards a city sports club’s activities, infrastructures and also the working hours in terms of percentage based on three categories (Very satisfied, Satisfied and Unsatisfied)
Generally, an average of seven out of ten members satisfied with all the aspects of the sports club. From the table, it was significant that males were more satisfied towards the range of activities of the sports club, while women put more satisfaction to its opening hours.
Regarding to the range of activities, 95% of males (55% very satisfied and 40% satisfied) were pleased to it, but, almost one-third of women (30%) were frustrated about it. However, in a totally opposite way, 37% of men disliked the opening hours of the club, which differed from the female members as having a total of 97% of satisfaction.
On the other hand, similar satisfaction had shown by both female and male members towards the club’s facilities. Almost two third of both male and female members were very satisfied to its facilities (63% and 64% respectively), while 25% of men and 27% of women felt satisfied.

Please login or Register to submit your answer

we respect your privacy and take protecting it seriously

We respect your privacy and take protecting it seriously